Selection of the Airfield

​1.  Site Selection
On April 15, 1942, after a two week ‘courtship,’ and armed with maps, letters of support, core drilling results, preliminary surveys and plans,  and more, the Army Air Forces site selection board recommended the Moran community site north of Walnut Ridge, Arkansas as a substitute for the Halls, Tennessee site which had been rejected because 5,000,000 cubic yards of dirt would have to be moved.
​2. The WRAAF is Born
The Commanding General of the Southeast Air Corps Training Center approved the site on April 20, 1942.  On May 12, the War Department in Washington directed the Army Corps of Engineers to build an air field in the Moran Community. The new field was named Walnut Ridge Army Air Field – taking the name of the nearby town of Walnut Ridge, which had a population of 2,013. The air field was designed to accommodate 5,114 military personnel and a civilian workforce of 976.

3. Fortuitous Stroke of Luck
The selection of Walnut Ridge was an unexpected good fortune for northeast Arkansas, as it created approximately 2,500 good-paying construction jobs. Folks who had been unemployed or working for 50 cents to a dollar per day could now make that much in an hour.  The air field brought the area out of the depression.

4. Construction
Construction of the facility began June 20, 1942. A new access road from U.S. Highway 67 to the air field was started in July.  For several years that road was the widest paved highway in Lawrence County, two feet wider than U.S. Highway 67.  The road entered the air field’s west boundary at the southwest corner of the Mt. Zion Cemetery. The Mt. Zion Church was just north of the cemetery, and the Mt. Zion School was across the lane west of the cemetery. The Moran School, located near the heart of the new air field site, just over a mile east-northeast of the Mt. Zion Cemetery, was torn down to make way for the air field. 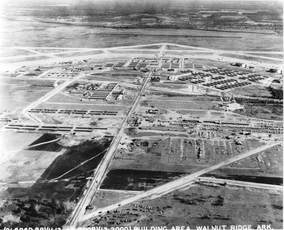 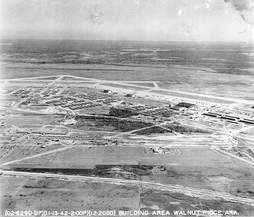 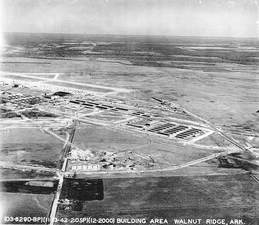 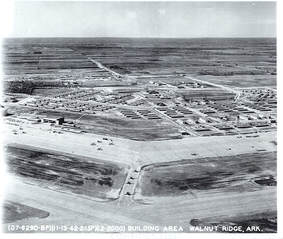 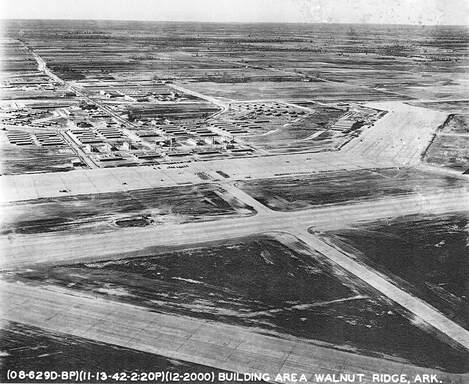 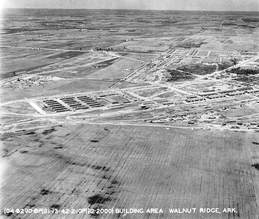 5. Activation
The air field was activated August 15, 1942, with the arrival of key personnel. Buildings were not ready, and a temporary Headquarters was established in the Mize Motor's building in Walnut Ridge. A group of 100 troops arrived on August 25, but there were no facilities ready at the air field -- so the troops were sent to the former CCC Camp near Pocahontas. On September 1, the first Station Hospital was set-up in the abandoned CCC Camp Infirmary. By September 5, a few buildings were ready and Headquarters moved onto the air field.  The Base Hospital moved from the CCC Camp to the air field on September 28.